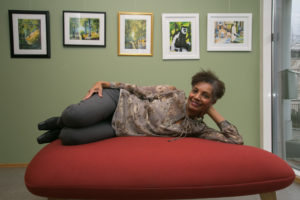 Fatma Issa Holm was born in 1960 in Lamu, Kenya. Today she is living in Aurskog Høland, Norway. She married in 1980 and have two grown-up children.

As a teenager she attended Lamu polytechnic school learning how to sow clothes and she attended afternoon hobby groups learning how to knit. Later when she moved to Nairobi she studied further at Nairobi polytechnic where she got her diploma in sewing. Her mother taught her to make embroideried hats and her aunt taught her how to decorate flowers, so her passion for domestic work and art started at a young age.

In Norway she continued her studies at Rud high school and later also attended an art college in Oslo where she got a bachelor degree in aesthetic subjects.

Holm has been teaching art in secondary schools, and other classes in Oslo. She has also worked for NORAD in Tanzania, Njombe district and Kenya, Machakos district. In both countries she taught in secondary schools and woman groups. She worked on a Pilot project at Strømmen art centre passing on art to primary schools in Akershus Fylke. Holm likes painting motives from Africa and she mostly paints women. Through her art she wants to show a different, wider side of Africa and its rich cultures. Holm is trying to achieve that by painting motives of animals and people in Africa from a different point of view.

Here you can find articles written about me

Education and qualification
College of art, with Cand. Mag. Examination in painting, drawing and sculpture

Writing
She has written two books with a collection of poems written in Norwegian.
1. Hjertet med sin lidenskap, 2001 (”the heart with its passion”)
2. Min due i min hånd, 2005 (”the dove in my hand”)

She has also been featured in different magasines of art and Norwegian newspapers like Aftenposten, Romerikes blad and Indre blad.